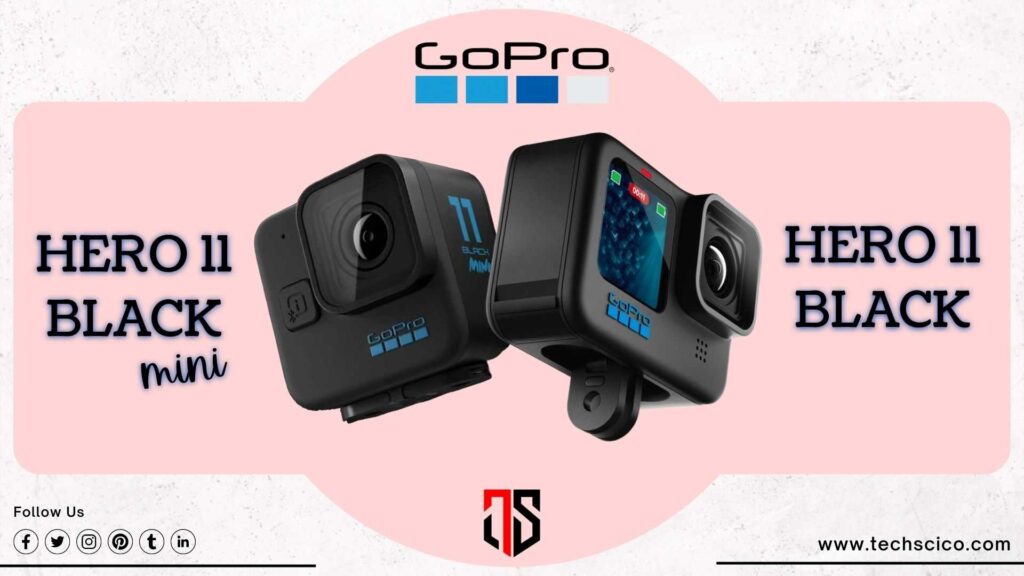 In terms of design, GoPro Hero 11 Black looks almost similar to the last year’s GoPro Hero 10 Black. It has the same 2.27-inch primary touchscreen display on the back and a color LCD on the front.

GoPro has made some significant hardware changes this time. The Hero 11 Black comes with a new 1/19-inch camera sensor, That can capture 27MP photos, an improvement from the 23MP of the Hero 10. This new sensor can capture 5.3K video in an 8:7 aspect ratio, with gives a larger FOV on GoPro than ever. If you want to edit 8:7 ratio videos with the aspect ratio as per your liking, you can easily do that with the company’s Quick app. This new larger sensor can produce 10-bit colors for Photos and Videos.

For video recording, Hero 11 Black can capture videos in 5.3K at 60FPS and 4K at 120FPS with SuperView supported for both resolutions, it’s nothing but the widest FOV mode. The camera also comes with a HyperView feature that can capture a video in a full 8:7 ratio and gives the 16:9 ratio output.

GoPro Hero 11 Black comes with the 5th generation of HyperSmooth, companies own stabilization feature that gets even better now. The camera also comes with a 360-degree horizon lock feature, which lets you record the video with up to 5.3K at 30FPS.

The GoPro Hero 11 Black is powered by the same GP2 processor as last year and comes with a removable 1,720 mAh Li-ion Enduro battery. This Enduro battery comes as a standard this time, earlier is available as an accessory. The camera is waterproof up to 10 meters without any housing.

The GoPro also launched Hero 11 Black Creator’s Edition Kit which turns this action camera into a vlogging rig. Along with the main camera, you will get accessories like Media Mod with Mic, Light Mod, and Volta extended battery grip with the kit.

GoPro launched one more device along with GoPro Hero 11 Black, The Hero 11 Mini is the compact version of the Hero series. We can call it a successor to the GoPro Session series, It’s not as smaller as the Session but the idea behind the both is same. the measurements of the Hero 11 Mini are 52.4 x 51.2 x 38mm and the weight of the camera is 133 grams only.

The GoPro Hero 11 Black Mini has Dual mounting fingers, which makes mounting easy on things like helmets, cars, and suits. The one thing that is hard to ignore in the camera is that it does not have any touch displays, not in the front or even in the back. Yes, you will get a tiny display at the top near the shutter button, that shows the battery life, video capture mode, and other useful info. The camera has a pairing button on the front.

The Hero 11 Black Mini comes with the same 24.7MP camera sensor as the standard model and can capture videos in 5.3K at 60FPS. The camera gets the same GP2 processor as well and has support for 1080p live streaming. The camera is waterproof up to 10 meters without any housing. The Mini comes with a 1,500 mAh Enduro Li-ion battery which is non-removable, so every time you need to plug the camera to charge it.